@RedRum Hey man, good to see you. Def jump on /t/2020 (The Dark Winter) tribe, we've been discussing this crazy fucking article for a while. It's fucking nuts

TIMES admits there was a conspiracy against trump. They admit the shadow operatives changed voting laws to rig the election. They use the word "fortify" and "save" the same way a loser at his own game would "save" his spot in 1st place if anyone was about to take him down a peg. They admit facebook and social media censored individuals and peddled information. They admit to funding protest groups. time.com/5936036/secret-2020-election-campaign/

This is everything everyone has been afraid would happen and explains why the Capitol is currently barbed wired and surrounded by militia. And nothing is being done about it. Politics is controlled by hysteria and cherry picked biased videos that suite the media's narrative. All this shows me the media is the mouth piece, and I theorize (but have no hard evidence) that the media IS part of the shadow government.

Think of all the journalists who try to spill the truth about FBI and pedo groups, individuals who have "the" story to reveal corruption and end up suicide in their home with 2 bullets to the back of their dome. If you go to the front porch of tyranny and say you have evidence against them, they will kill you. Going to the media with proof is akin to walking up to the devil's doorstep and asking for death.

I think america was stolen from us, or sold out, a long time ago but they have tightened their grip on control. It's been obvious to me we've been on a decline for decades but now they are so on the nose about it.

This doesn't mean give up but to be extra careful out there. They brainwashed our kids to grow up and be mindless soldiers, sold on a lie that love trumps hate and open borders means open arms. And that patriotism is racism and strong men are toxic. The same people grooming these kids through ideologies are the same people fucking kids on Epstein's Lolita Island. Is it any coincidence they're fucking these kids?

My point is this: we need to make our children prepared for these creeps both mentally and physically. That they cannot be swayed by predators and false ideologies. But just like the decades they had to plant those seeds into our youth and therefore our culture, it will take time and relentless persistence to undo their poison they placed in the soil of our homeland and plant new seeds (children) stronger and wiser than theirs. Resilient to their ideological poisons and emotional pesticides.

I have hope for the gen-Z kids. They're not dumb. And most see social media for what it is. But they will be fighting this culture war alone if we don't lend a hand and support them when they get attacked. It's inevitable. The machine will want to cleans every free thinker and republican who opposes them. So as cynical and correct about things I might be, I see a fighting chance and therefore hope for america in the future.

So in conclusion: Be safe. Be smart. Don't trust the media. Stay away from the camera. Shun news reporters. Shun journalists. Drop sugar coated red pill hints into the youth. Hide your beliefs. Keep them close to your heart and don't let your words betray you. Strengthen our children, strengthen your muscles, strengthen those who share the same values and ethics that you do. And most of all prepare for the long game. The Secret History of the Shadow Campaign That Saved the 2020 Election
For more than a year, a loosely organized coalition of operatives scrambled to shore up America’s institutions | Time
2 3
Copy Permalink

@Fawk_Face it's been my thing since day one. pay attention

@RedRum It's been too long. Please keep us updated.

This has been overdue This may also be the last thing I make and share with you all Time will tell. Keep up the good fight.

@RedRum Okay. Whatever the Jews are or aren't doing - what are the Jewish conspiracy people advocating for? Or even discussing?

I'm not seeing any actionable advice for what to do to stop the Jewish world, or get ahead in the Jewish world. Or really any discussion at all. I just see people saying "the Jews" back and forth to each other, to signal that they're on the same Jewish conspiracy team...but nothing more.

@CainPrice Arguably modern Christians are just as bad but in a different way. They're bureaucratic and think the rules are in place to do "good" and blindly follow and enforce like little people-police. Throw in some wealth and a sexually-oppressed marriage and you have a cuck with a whip demanding others in his life should walk the same path as he.

@CainPrice Didn't say they're running everything and are evil.

@RedRum Right. So the Jews are ruining everything and are evil. What are these conspiracy nuts saying we do about it? Shoot people? Stage protests? How do we get ahead in the system and make the most of it?

Best I can tell from these guys is that the solution to the Jewish world is to say "the Jews" on the internet a lot but not make any substantive discussion. Just let everyone know that you know about the Jew thing, too.

@redforeducation get off the computer and go outside 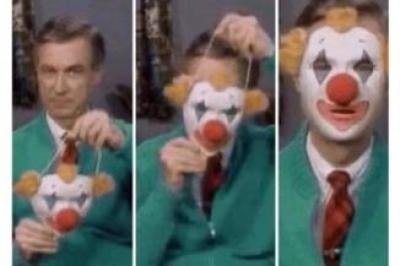 Turn That Frown Upside Down

Bitches call me rude and disrespectful

"In the king's court only the jester can speak the truth"

Treat women like a queen. You know who the Queen is? The King's bitch.